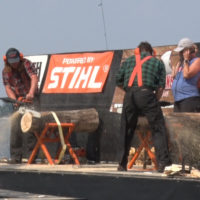 It was an event that had the audience cheering, booing and chanting “yo-ho” all in good fun. The Timberworks Lumberjack Show had three performances at Paul Bunyan Park, and each show was jam-packed with action and entertainment. Two world-class lumberjacks showed off their skills in eight different events throughout the show.

“It’s a 35 minute family show. We try and represent the history of timbersports and the logging back in the day,” Nick Hastedt, a performer with the Timberworks Lumberjack Show said.

During the performance, Hastedt and Ian Freeburg performed in various log games.

“We have some chainsaws events, some sawing, climbing, some log rolling, some chopping,” Hastedt said.

The two lumberjacks have been doing timbersports for years.

“They basically throw you in the lake and try and teach you how to log roll,” Hastedt said. “I grew up doing that and then when I turned about 17, 18 years old, that’s when most people start picking up axes and saws and learning how to climb.”

“When I was five I saw a show like this,” Freeburg said. “I knew I wanted to be part of it. Somebody gave me a wood chip and I thought it was really cool. So when I got into college, I joined a collegiate team and did it there for four years.”

The Timberjacks Lumberjack Show travels and performs around the country and has also performed in parts of Canada. The show gives spectators a brief history on logging and a comedic performance.

“I really enjoyed it. The cutters are really entertaining, as well as the events. It was very humorous,” Chase Anderson said.

“It’s a lot of fun to entertain people, especially in a live show because it’s right there. You can’t fake it, really. It’s fun to make people laugh and have kiddos running around,” Hastedt said.