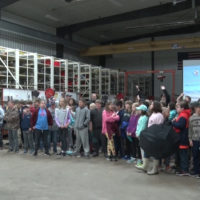 Over 200 5th graders were greeted by Jason LaValley and his team as they entered the manufacturing site.

“We’re trying to teach children about entrepreneurship and tell them about how we took a product from an idea all the way to a finished good, and we sold it all over the world and the steps it took to get there,” LaValley Industries CEO Jason LaValley said. “And how we duplicated that process with multiple other products and also about all the jobs in manufacturing.”

LaValley has been inviting students for five years to his facility. He says Manufacture Your Future is more about educating students about manufacturing and the opportunities that the industry has to offer.

Students are divided into groups and rotate to three different stations. When the 5th graders were asked about what their favorite part of the field trip was, they all had similar answers – they all enjoyed operating the excavator.

Jorge Prince, the Chief Financial Officer of LaValley Industries, said they want to inspire kids in different ways to think about their future. They also want to show them that manufacturing is not welding and bolting things together.

“Maybe start thinking about what are there interests, what are some possibilities that they can do for their future. I’ve had already one kiddo that talked about how she thinks she wants to do one of the jobs that he described in there,” teacher Anna Grand said.

The first station is a presentation about LaValley Industries, and the second station lets kids design and build their own deckhand and to see how it will function. The last station allowed students to operate the excavator.