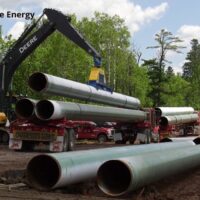 The action Tuesday comes a day after state regulators approved the final permit for the $2.6 billion project. Spokeswoman Juli Kellner said Enbridge began construction in several locations around the state in the morning.

Kellner says the workforce will ramp up as construction continues, eventually creating over 4,000 mostly local construction jobs. Enbridge spent years pursuing permits for the project before the last one, a construction stormwater permit, was granted Monday by the Minnesota Pollution Control Agency. Two tribes, the Red Lake Band of Chippewa Indians and the White Earth Band of Ojibwe, asked the Public Utilities Commission last week to stay its approval of the project, saying the influx of construction workers would put residents along the route at higher risk of COVID-19.

A consolidated appeal by environmental and tribal groups is also pending before the Minnesota Court of Appeals. Several activists and indigenous groups filed a lawsuit Monday evening challenging the MPCA’s permit approval, citing the pipeline’s threat to waters where Native Americans harvest wild rice and negative effect on climate change. Enbridge says replacing the deteriorating pipeline, which was built in the 1960s and runs at only half its original capacity, is the best option for protecting the environment while meeting the region’s energy needs.

Kellener says Enbridge has enacted strict guidelines to guard against the spread of the coronavirus, including testing workers regularly and repeatedly, requiring mask wearing and social distancing, and sanitizing work areas regularly.

Mine Opponents to Ask Minnesota Supreme Court to Void Permit