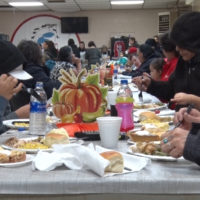 “They did pretty good. It’s the first time I ever came to one like this and I’m surrounded by family members,” says Babe Strong, an elder in the Red Lake community who came to the community meal.

“I just loved it because of the fact it that it isn’t only open to the elders – it’s open to everyone, so everybody has a chance to get a meal, a good healthy home-cooked warm meal,” says Vicki Stately, a Red Lake community member.

There was turkey, mashed potatoes with gravy, green beans, cranberry sauce and, of course, pumpkin pie. All the food was catered by the Seven Clans Casino. The community meal was put together to bring a new positive event to Red Lake that focused on being together as a group.

“I like to do thing like this. It makes you feel better inside that you’re doing things, teaching. We have volunteers that show that they have an interest in being a part of the community,” says Bobbi Jo Beaulieu, a volunteer.

Before this year, the Red Lake community used to host a soup line around Thanksgiving time. After months of collaboration between the Community Center, the Tribal Council and the casino, the community meal was born.

“The community coordinator, we meet with her regularly. She gives me and the other representatives some, kind of, ideas she would like to do and we tried to give her that freedom to run with her ideas just to keep the events going and keep them positive,” says Robert Smith, the Red Lake District representative.

The community meal brought out more than 40 community members. At the end, people were allowed to take to-go containers. Anything else leftover was given to the local homeless and woman’s shelters.

“The meal was just nice and hot, and if you wanted more you could go up and get more and it was cooked really well. I don’t have anything bad to say about the food at all. It was wonderful,” says Stately.

To keep the community events going strong, the first ever Elders Christmas Meal will take place next month on December 21st at the Seven Clans Casino in Red Lake. It starts at 11 in the morning. 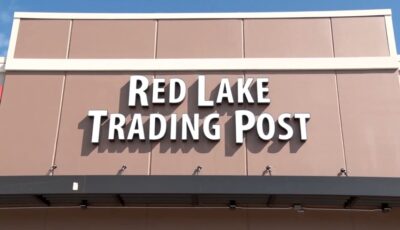