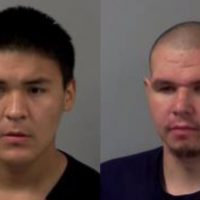 Two men were arrested over the weekend for allegedly kidnapping and torturing a man and for also allegedly wounding a woman at a mobile home park in Bemidji.

23-year-old Anthony James Wittner of Cass Lake and 19-year-old Edward W. Jenkins-Whitefeather, Jr. of Bemidji were both charged Monday in Beltrami County District Court with one count of kidnapping to commit bodily harm and two counts of second-degree assault.

According to a criminal complaint, at approximately 1:11 p.m. on July 19th, dispatch received a report of an adult male, later identified as J.H., running with his hands restrained behind his back and multiple lacerations all over his body. J.H said he and a female friend, M.S., met another female, Randi, in a movie theater parking lot. The woman, according to J.H., lead them to a mobile home in the Grass Lake Mobile Home Park.

According to the criminal complaint, a fight ensued after Wittner and Jenkins-Whitefeather, Jr. began accusing J.H. of falsely representing himself as a Gangster Disciple gang member.

The victim, J.H., reported that Jenkins-Whitefeather, Jr. used what appeared to be a metal sword to strike M.S. across both her hands. M.S suffered severe injuries, including lacerations across her abdomen, and several broken bones according to the complaint.

According to the complaint, J.H. reported Jenkins-Whitefeather, Jr. and Wittner laid him on his back on the floor and then suffered water torture for 20 to 30 minutes.

J.H. reported that the defendants questioned him and accused him of various offenses such as poisoning an elder, sexually assaulting a 15-year-old female, and falsely representing himself as a gang member, according to the complaint.

J.H. was then put into a bedroom closet and Randi left with M.S. to try and get medical help, according to the criminal complaint.

J.H said he was able to flee the home after Wittner passed out and Jenkins-Whitefeather, Jr. left the residence.  He told authorities that he had been held against his will since 5 a.m.

Wittner was placed under house arrest as law enforcement searched the home. According to the criminal complaint, authorities found a sword blade on the porch, dried blood on the walls and floor, a kitchen knife under the living room couch cushion, and a replica black semi-automatic style handgun on the floor of the rear bedroom.

M.S. was ultimately transferred to a Fargo hospital due to the extent of her injuries.

Wittner claimed Jenkins-Whitefeather, Jr. offered him $2,000 and an AK-47 as payment for helping him with the incident. Wittner gave a statement that was consistent with J.H.’s statement, reports the criminal complaint.

According to the complaint, Wittner told law enforcement that the ultimate plan was to take J.H. to Red Lake Nation and kill him.