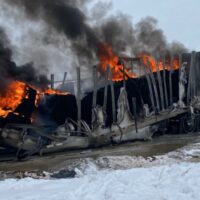 The Minnesota State Patrol reported a crash that happened this morning just before 9:15. Poor visibility and challenging road conditions lead to a crash featuring 29 cars. All of the snow fall in the area made it terribly difficult to drive in.

The accidents took place on I-94 near Wright County Road 18. The State Patrol saying several vehicles caught fire, while nine people were transported by ambulance to a local hospital. It is reported that the injuries are all minor ones.

Of the 29 vehicles that were involved in the crash, at least half of them were semis. As first responders first started to arrive, they mentioned several drivers had left the scene before they got there.

If anyone has any involvement and/or knowledge of the incident, you are asked to contact the Minnesota State Patrol St. Cloud District Office as 320-223-6666.