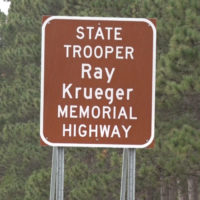 It was a day that the Krueger family will never forget. On November 20, 1959, State Trooper Ray Krueger was traveling on Highway 210 when his patrol car was hit head-on by another vehicle.

“He was injured and when the first trooper arrived, Ray Krueger, being a State Trooper through and through, said, ‘you might want to help the other guy, I think he’s worse than I am,’ and one thing led to another and at the hospital Ray Krueger ended up passing away,” said Col. Matt Langer, Minnesota State Patrol Chief.

“I was 15 years old when my dad was killed,” said Ray Krueger’s son, Jeff Krueger. “Seems like yesterday to me.”

Now, 60 years later, Krueger is being memorialized in a special way. Starting about four miles west of Brainerd, the section of Highway 210 from the eastern border to the western border of Cass County was renamed as the State Trooper Ray Krueger Memorial Highway.

“One of our core values is honor and that’s what today is all about is honoring those that have come before us and in this case, paid the ultimate sacrifice,” added Minnesota State Patrol Captain Joe Dwyer.

The process to officially rename the portion of the highway was not easy. A bill was first introduced in the Minnesota State Senate by Senator Paul Gazelka, R-Nisswa, around two years ago.

“Two of the granddaughters went down to the Capital and testified on behalf of the bill introduced by Senator Paul Gazelka,” explained Capt. Dwyer. “So for this to come to fruition and to see that happen is absolutely wonderful.”

Though the day was bittersweet, it was important to the State Patrol and the Krueger family that their father was memorialized.

“It’s unbelievable. We didn’t think this day would ever come. 60 years is a little late, but it came and that’s the main thing,” said Jeff Krueger. “We’re very proud and happy.”

The Minnesota State Patrol hopes that in addition to memorializing Ray Krueger, the memorial highway reminds drivers to always drive safely and follow traffic rules so a tragedy like this does not happen again.