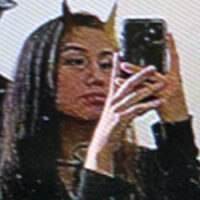 Law enforcement in Bemidji continues to search for a girl who was 15 years old when she went missing last year from Bemidji.

Nevaeh Kingbird was last seen leaving a home in Southview Terrace Park in southeast Bemidji on October 22nd, 2021. According to a release from the Bemidji Police Department, it is believed she was wearing a black zip-up hoodie, blue “skinny” jeans, a white t-shirt or tank top, and black and red Nike sandals on the day she was last seen.

Kingbird was reported to the Bemidji Police Department as a runaway on October 22nd last year. During that time, it was believed that she was still within the Bemidji area with friends. While the concern for her whereabouts increased in early December, it had appeared that no one had been in contact with her since October.

Both the Bemidji Police Department and the Bemidji Fire Department have conducted many ground searches for Nevaeh, as well as numerous interviews with family members and friends, analysis of related reports and social media, and aerial searches with the use of canine teams.

The Bemidji Police Department has also collaborated with the FBI, Minnesota Bureau of Criminal Apprehension, and the Center for Missing and Exploited Children to help assist in Kingbird’s investigation.

In a release, Police Chief Mike Mastin says that with the snow melting and spring approaching, Kingbird’s family, along with the Bemidji Police Department, is requesting that all residents in the Nymore area and south to Hubbard County Road 9 to please check all their out buildings, items with covers, and any area on their properties where someone may seek shelter.

Mastin added that he and other officers are also requesting for people to check their property and keep their eyes open for anything that may be related to Kingbird.

If anyone has any information, they are asked to call 218-333-9111 and only share official posts from the Bemidji Police Department’s social media platforms. Any information can also be reported to Crime Stoppers of Minnesota at their website (crimestoppersmn.org), by calling 1-800-222-TIPS (8477), or by using the P3 Tips mobile app. All contact with Crime Stoppers is anonymous, and anyone submitting a tip through them may qualify for a reward of up to $1,000.