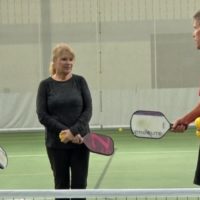 On Saturday, the courts at the Gillett Wellness Center at Bemidji State University were occupied by people learning a sport that has become highly contagious among all ages. The Bemidji Pickleball Association hosted a Learn to Play Day where eight pickleball mentors were available to teach the sport to new players.

“We have two to three mentors on each of the courts. And people that are coming in from the public that want to play, we’re teaching them the rules and then we’re just kind of rotating them back and forth so that they get to play different people,” said association member David Rave said. “It’s really a fun game and as soon as people start to play it, they really enjoy it.”

The sport can be quiet challenging, fast paced and even competitive, but experienced players are still eager to introduce the sport to beginners.

“Most pickleball people are so excited about their sport that they want to attract more and more people. And some of the most experienced players are willing to play with beginners and even not try quite as hard to win, just to get the ball in play so that they are not, beginners are not discouraged,” said Jane Killgore, a member of the Bemidji Pickleball Association.

New players were provided with the equipment to play, such as the Wiffle ball and the paddle. The sport is a combination of tennis and ping-pong. The court is smaller than that of a tennis court, and there’s always four people playing.

“I don’t know if it’s because of the Wiffle ball, but it’s pretty easy to get to the ball versus a tennis ball. I always feel like I’m playing fetch because it just whizzes past me. And then I guess, just pretty easy to handle this paddle, too,” participant Amanda Gartner said. “So, it’s a really – like I said, I’m not the most athletic person, but it’s really fun to pick up and be able to play a couple of games already.”

The rule is the hardest part to learn for any player in the game. A member of the Bemidji Pickleball Association says if you can learn how to score in pickleball, you learn the sport.

“So you play to 11 points, you only win a point when you’re the server or your team is the server,” Killgore said.

The Bemidji Pickleball Association hopes to continue this event in the future.