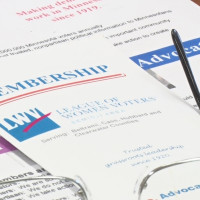 The League of Women Voters of the Brainerd Lakes Area met today for their September program. The league was nationally established after the 19th Amendment passed in 1920, giving women the right to vote.

The League of Women Voters, which is approaching its 100-year anniversary, is a nonpartisan group that has the mission of envisioning a democracy where every person has the desire, the right, the knowledge, and the confidence to participate. The group focuses on vital democratic issues of concern to group members and to the public.

“We’re a nonpartisan league. We’re dedicated to educating voters on different topics. We put together all of the candidate forums, in conjunction with others,” said Rebecca Laplante, Brainerd League of Women Voters President.

“One of the biggest threats to our elections environment is misinformation, and one of the things that I’ve always felt is it’s important to get out and make sure that people know that there is security around our elections process, and the only way that they can know that is if we provide that information to them,” said Deborah Erickson, Administrative Services Director for Crow Wing County. “So, by having that opportunity to meet with groups like the League of Women Voters, we can get the right information out to the public.”

The League of Women Voters will be holding a congressional election forum as well as a forum for the race for Crow Wing County Sheriff in the coming months.