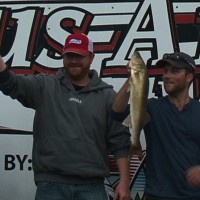 Ready. Set. Fish. 100 teams of fishermen casted their lines on Lake Bemidji Saturday during the 14th annual Kraus Anderson Walleye Classic. The tournament director says it was another year of great weather, which made for a perfect day of competition on Lake Bemdji.
Tracy Pogue tournament director says, “This is the hardest tournament in Northern Minnesota to win. 100 great (teams) of fishermen battled for eight hours out here. Perfect day for walleye fishing. We weighed a lot of fish. Not the biggest fish we’ve had to the scale but just a great number of them this year.”
Sean Moran, part of the winning team from Bemidji, says, “It’s been something I’ve wanted to do for a number of years. Mike has done it with some other folks. And we just knew we did quite well in that league last year and it’s just a really fun event and a chance to earn a little bit of money if you do well.”
The tournaments limits forces a few some of the teams to throw back some of their bigger fish. The teams were only allowed to keep five fish to be weighed at the end of the tournament.
Mike Winkler says, “We caught a lot of fish. I guess we were more astounded by the amount of big fish that we’ve caught. We caught over a half a dozen over 20 inches and three over 25 (inches). It was just phenomenal. It seemed like everything we put down we couldn’t go wrong they were hitting it.”
After eight hours on Lake Bemidji, it’s time for the fishermen to bring their catch ashore weigh their walleye, so we can crown a champion.
Moran says, “We fished a local league last summer, Taber’s Walleye League and we did quite well. Over the winter we started talking maybe we should try the Kraus Anderson. And we ended signing up in March and here we are.”
The winners says it was an honor to win with a good friend. And they look forward to celebrating their victory.
Winkler says, “I was just happy to do it. I’m born and raised in Bemidji. I love fishing Lake Bemidji. It’s just fun. Fishing with my good buddy Sean, it’s just a great accomplishment to do it with a great friend of mine and just had a good time doing it.”
Moran says, “Of course there’s a couple of bills to pay but hopefully something fun. Definitely beer and wings tonight.”
At least three teams had a bigger fish than Winkler and Moran. The biggest fish was 6.71 pounds.