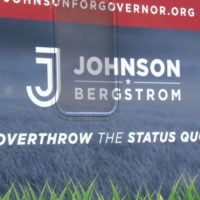 ST. PAUL, Minn. (AP) — Republican Jeff Johnson rode his upset primary win over former Gov. Tim Pawlenty into a fundraising surge in the election for Minnesota governor, according to campaign finance records released Wednesday that show him pulling even with Democratic Rep. Tim Walz in the cash race.

Johnson had raised just over $300,000 heading into the primary and was an underdog against Pawlenty, who held a fivefold cash advantage heading into the Aug. 14 primary. But he handily beat Pawlenty to capture the Republican Party’s nomination for a second time; Johnson lost to Democratic Gov. Mark Dayton in 2014.

Donors big and small took notice. Johnson took in $1.3 million since the primary, roughly equaling Walz’s haul. Each of the candidates to replace the outgoing Dayton enters the homestretch to November with roughly $1 million on hand.

“Clearly Minnesotans have rallied behind our campaign and their support and enthusiasm, even after a tough primary, have set us up for victory in November,” Johnson said in a statement.

While lobbyists and wealthy GOP donors had largely backed Pawlenty, they combined to contribute hundreds of thousands of dollars to Johnson after his primary victory. Sixty-five donors gave Johnson the maximum $4,000 contribution after Aug. 14, compared to just six before the primary.

Walz, meanwhile, has continued the fundraising pace that made him the top candidates in the three-way Democratic primary. Both candidates have accepted public campaign subsidies in exchange for agreeing to spending limits in the race. Walz received $476,000 while Johnson got roughly $358,000.

The open governor’s race is one of many closely watched races in Minnesota’s midterm elections, which also features two U.S. Senate elections, four competitive congressional races and a bruising race for attorney general. But it’s unclear whether the fundraising numbers will draw outside attention back to the race.

The Republican Governor’s Association canceled several ad reservations for the final weeks of the general election that it placed back in April, when it pegged Pawlenty as the favorite in the race.