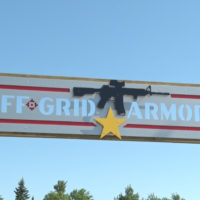 In Business: Off Grid Armory Opening Its Doors In Shevlin

Sam Smith was selling armory from his garage until he decided to open up his own store. That was almost four years ago. Now, Smith is adding the final touches to his shop before it’s open for business.

“Our mission is to equip our customers so they can protect themselves,” Smith said. “Everybody has the right to defend themselves and protect the people that they love.”

Off Grid Armory is a company that not only sells firearms, but it also offers permit to carry classes once a month throughout the year. Smith said his store offers a lot of things that most gun shops don’t.

“We sell suppressors, we have a silencer shop kiosk in-house and we are a Class 3 NFA Dealer,” Smith said.

The design and the color scheme of the building Off Grid Armory was voted by customers on Facebook, and the owner tells me that the whole facility is bulletproof.

“The building is a vault, it’s a fortress, it has no window. It’s basically an impenetrable building,” Smith said.

Smith says that when it came to designing the building he had some help from law enforcement. The facility has a permit to carry classroom, a shooting range, and retail space.

“The building is 3,200 square ft. inside of the building, another 1,200 ft. outside where the range is at,” Smith said. “Inside we have an 800 square ft. classroom for permit to carry classes, and then we have a lot of retail space for selling of firearms, rifle, handguns, optics, ammo.”

Smith says that he created his brand four years ago and that he aims to make the community safer.