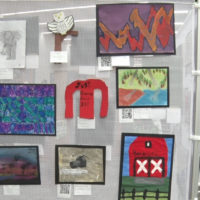 Bemidji Middle School Science Fair attendees were bound to see some pretty cool projects during the event, but this year, guests were given a bonus treat as the BMS Art Show was happening simultaneously.

“We did it the same night as the science fair just because we knew there would be a lot of foot traffic and a lot of people in the building from the community, so a lot of people would be able to see the art,” says Molly Wiste, BMS Art Teacher.

The Art Show featured all different mediums from paper mache to acrylic, watercolor and mixed media.

Wiste says, “Students were actually able to select what piece they wanted to have in the show so I let them choose what they were the most proud of, and that’s the piece that they have in the show.”

Erianne Dokken is an 8th grader whose art was featured in the show. She describes one of her pieces by saying, “This one is ‘Whispers From Below’ and I made it with some craft metal, some wood and it’s more of, like, an abstract piece. It kind of looks like metal seaweed kind of.”

7th grader Madison Heck says about her artwork, “My inspiration for my art piece is that it’s actually my future job idea, is I actually want to be news reporter when I’m older and I also love photography. It’s one of my favorite hobbies, so I decided to make a piece related to both of those.”

This was the first ever art show at BMS, and more than 200 students were given the opportunity to submit their work. There’s a good chance we’ll be seeing another art show like this one in the near future.

“All the students from 1st and 2nd quarter have art here in the winter art show and then we plan on having another art show in the spring for 3rd and 4th quarter students, so everyone has an opportunity to show their work,” says Wiste.

The Art Show was deemed a hit. Not only did the pieces reach a wider audience, but students also gained a few bonus benefits.

Heck says, “It’s kind of cool being a part of the first art show here, especially with Ms. Wiste because I was in her class for a whole quarter here, and it was just fun because I know her now and when I see her in the hallways I can just says ‘hi’ and talk to her.”

“It felt really good to show off all my art so I can get everyone inspired to look at art in a different way and how pretty it can be,” adds Dokken.