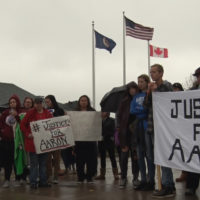 The death of a Bemidji man has raised questions over the investigation into his death and through the use of a rally is calling for justice for Aaron.

It was September 3rd when the body of 23-year old Aaron Krabbenhoft was discovered in his second floor apartment, but questions have been raised over how Aaron died and how the investigation has been handled.

It’s been 30 days since Aaron’s death, and while few details regarding his passing have been released, authorities say this investigation is still ongoing.

While it’s not out of the ordinary, Aaron’s body has undergone two autopsies, and once the investigation is fully completed, more information will be released.

In a march that traveled through the city, they came to a pause at the Lake Bemidji waterfront, where Aaron’s father shared his thoughts.

As the investigation continues, law enforcement encourages anyone with information in the case to still come forward. If you know of any information regarding the case, you are asked to contact the Bemidji Police Department.