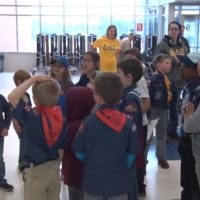 Today, it’s official: Cub Scout Pack 82 in Bemidji is now co-ed. In fact, half of their new sign-ups this evening were from girls.

“Our national organization back in August decided that in order to continue on with our scouting program, we’ve had a lot of families who have been requesting to have a place where they can bring both their boys and their girls to and they decided back in August to say, ‘yes, we’re going to do that as a program.” So, today marks the first day that girls can join our program,’” says Brad Olson, district director of the Boys Scouts of America.

“I think it’s great timing. I think it’s, you know, it’s just great that we can open up and diversify any young child who wants to do any kind of activity – girls or boys,” says Sarah Sundeen, a mother of two and also a den leader with Pack 82.

There are a lot of skills that can be learned from joining the Cub Scouts, like how to tie a knot and make a fire. Members also learn lessons about good citizenship and character development.

“What I like doing in Cub Scouts is we get to go on camping trips,” says Cub Scout member Garret.

“I heard that there is archery and all that stuff,” says new Cub Scout member Emily.

The Boys Scouts of America are also dedicated to family, and that played a big a part in the decision to let the ladies in.

New Cub Scout member Hannah says, “Both of my brothers are in Cub Scouts, so I’m doing it.”

Sundeen says about her own experience, “It’s been important to us as a family. It’s something we can do together, all four of us, my husband included. And it’s nice to be able to do things in the community and to do a lot of things outdoors and service projects.”

Overall, many of the girls are just excited to get started.

Emily says, “I think it will be kind of nice. A little better than Girl Scouts because I’m kind of more like a tomboy and I’m kind of excited for it!”

The boys, on the other hand, are looking forward to sharing the experiences the experience with their sisters. When asked what he hopes his sister will learn in Cub Scouts, Cub Scouts member Graham says, “How to be safe and how to be respectful.”

Dylan’s sister is too young to join Cub Scouts right now, but when she is old enough, Dylan says it will make him happy.

Dylan says, “When she’s older, I’m sure she would really like to.”

“The boys have enjoyed the program up until now, and now it’s time for their siblings and the girls to be apart of our program and to get that same experience too,” says Olson.