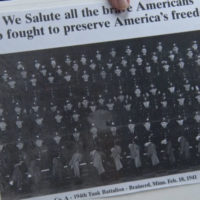 Erma Peck has fond memories of her husband, Henry Peck. He passed away in 2011 and was a prisoner of war during the Bataan Death March.

“He was ok, but he doesn’t want to take any crap from anybody,” said Erma Peck, wife of Henry Peck. “He stands up for himself.”

Henry Peck is being remembered along with the men from the 194th Tank Battalion on the 75th anniversary of the Fall of Bataan where American soldiers surrendered and the Japanese forced them to march as prisoners.

“They were all young men practically boys and to be called into that war it is sad,” said Peck.

A wreath laying ceremony was held in front of the Brainerd National Guard Armory. The gloomy weather didn’t stop people from coming out to support men who paid the ultimate price and lost their life in combat or captivity.

“It’s important for us to keep their memories alive as you well know many of them aren’t with us anymore,” said U.S. Army Captain Christopher Bingham. “In fact we have one survivor left who couldn’t unfortunately be here today, but as time progresses it’ll be incumbent upon us and the family members to keep the tradition alive.”

One by one, 32 names were called to honor the spirit and brotherhood of the men. Their dog tags were then hung on similar tanks used during that time period.

A rifle salute and the raising of the “Honor and Remembrance Flag” followed. The crowd of family, friends and other service men and women then went inside the Armory.

During the ceremony it was said how these men suffered cruelty, and had a sense of helplessness. For Dottie Bisted she never met her great uncle Gerald Bell, who was killed in action but his sacrifice doesn’t go unnoticed.

‘Thankful that I have, that I have the liberties that I do today, because of the sacrifices that they made,” said Dottie Bisted. “I feel proud of their sacrifices.” 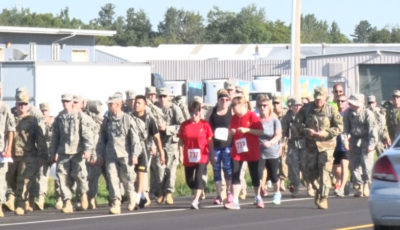 Health Screening Required For Campus Access At BSU and NTC

Bemidji Sings! Annual Competition to Be Held Virtually This Year