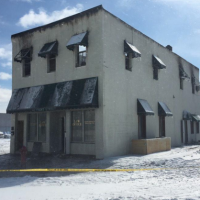 One man is dead after a fire raged through a building housing two apartments upstairs and a law office downstairs this morning.

Brainerd fire officials say the fire happened around 3 A.M., one block from the historic Crow Wing County courthouse. When they arrived they saw heavy fire and smoke coming out of the southeast side of the second level. Forty firefighters fought the blaze and where at the scene for about eight hours.

Fire officials say the fire was too hot and smoky to attack it initially. The resident in the front apartment was able to get out, but the resident in the back was pronounced dead on the scene and was later transferred to Ramsey county for an autopsy.

Brainerd fire says they expect to reopen the three blocks around the fire later this evening after their investigation. The cause of the fire is still under investigation.