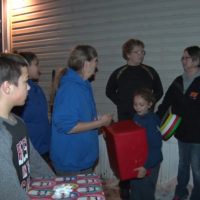 For the 3rd year in a row, a family in Bemidji who has recently fallen on hard times will be have an extra merry Christmas thanks, in part, to the Bemdiji Best Christmas Ever team.

“Thank you guys for doing this,” says family member and daughter Kelsey.

“Thank you guys. All of you guys! I am so happy right now I can’t stop smiling,” says Kaylie, the oldest daughter of the family.

The Hunter family came on rough times earlier this year when daughter Kaitlyn was diagnosed with cancer. They’ve been making trips to hospitals down in the cities ever since.

Brandon Hunter, Kaitlyn’s father, says, “The way I feel about it, kind of in August at the time we found out about the diagnosis is you almost thought that your life stopped at that point. Other than that, it’s been a very testing year for the other children.”

“It’s been really hard on us kids because we haven’t had our parents home lately,” adds Kelsey.

The family was nominated by Kaylie’s teacher, Jaqueline Stoffel. She nominated the family because she thought the surprise could help the family a lot.

Stoffel says, “I had Kaylie in class, and a lot of times as this was going on she would come and sit by me during class and just talk to me about what’s going on and at the time, and so I got to know the family just through her, and I thought this would be something wonderful for their family.”

The Best Christmas Ever surprise is a huge plus for the family, but another thing that’s making their holidays happy is that Kaitlyn is finally home.

“I was totally shocked that everyone came here just to wish a merry Christmas to my cousin Kaitlyn,” says family cousin Anthoney.

Kaylie adds, “I love my sister coming home. It’s just a surprise that my sister’s coming home and staying home for a little while until Christmas.”

Final numbers are still being tallied but overall, the community was able to raise around $7,000 worth of gifts and donations for the family. The family says they are extremely grateful for everyone’s generosity.

“Aside from what you might see on TV, there truly are still good people in this world, and I don’t care what anybody says. I’ve learned that a lot through this process and there’s a lot of times that you would you never make it through without people like this, and I truly want to say thank you everyone from the bottom of my heart,” says Hunter.

In the future, the Bemidji Best Christmas Ever team says they hope to someday get to a point where they can help out multiple families in the community.