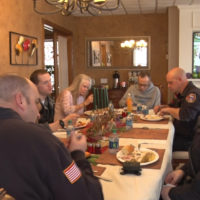 Thanksgiving is a time to be surrounded by family and friends, but that’s not always the case for some police officers, deputies, and EMTs. In 2016, a Bemidji couple decided to open their home for a Thanksgiving meal for first responders on duty.

It’s been a Thanksgiving Day tradition for the past three years. Jill and Dick Beardsley, the owners of Lake Bemidji Bed and Breakfast, open their home to first responders working during the holidays.

The Beardsley see around 15 to 20 first responders come through the doors of their bed and breakfast each year.

“They obviously all want to be home with their families on a day like this, but sometimes they have to, obviously, be on duty, so we fix up all the trimmings for Thanksgiving and Christmas and New Years, and we have them over and we so enjoy doing it,” Dick Beardsley said.

The generosity of the Beardsleys has caught the attention of one local grocery store, Lueken’s Village Foods in Bemidji. This year, they offered some items for the Thanksgiving meal.

Turkey, ham, stuffing, cranberry sauce, pumpkin pie, and mashed potatoes and gravy are just some of the traditional homemade staples that the Beardsleys have spent all day cooking. For them, Thanksgiving is about being with family.

“And this empty plate is a memory of Andy and all the other first responders, all the other veterans that are no longer with us, but served our country and communities,” Dick Beardsley said.

Every year, Dick Beardsley sets an empty plate at the table for his late son who served in the Iraqi War.

“Four years ago, he died of suicide, he suffered from post-traumatic stress disorder, and I miss him every single day. And Thanksgiving was always his favorite, very favorite holiday. And so, he’s missed every day, but especially today on Thanksgiving,” Dick Beardsley said.

As you’re sitting down with family and friends this Thanksgiving, remember those first responders who are working through the holidays. This is one tradition the Beardsleys hope to continue for holidays to come.