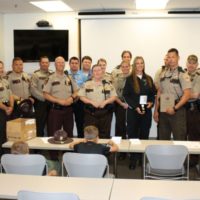 Beltrami County Deputy Sheriff Jeff Roberts and his wife Linda were honored by the Wyoming Highway Patrol Association at a ceremony recently held at the Beltrami County Law Enforcement Center.

The Roberts were traveling on Interstate 90 in Wyoming on September 22, 2016 when a Wyoming State Trooper driving ahead of them was hit head-on by a vehicle traveling the wrong way on the highway.

Deputy Roberts and Linda, who is a North Memorial AirCare Flight Paramedic, immediately stopped and treated Trooper David Motsick on the scene until emergency crews arrived. Motsick sustained multiple life-threatening injuries in the collision. The Roberts’ also tended to the driver of the other vehicle, but the driver later passed away from injuries sustained in the crash.

Trooper David Motsick was awarded the Purple Heart as a result of the incident and continues to rehabilitate from his injuries.

Brainerd Woman Who Died After Being Hit By Truck Identified