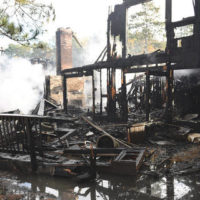 In a news release Crosslake Fire Chief Chip Lohmiller stated that 13 of the 17 individually owned units were heavily damaged by fire. He also stated that four units had water damage.

Firefighters from Brainerd, Nisswa, Pequot Lakes, and more were called around 5:30 a.m to fight the fire. The area departments were on scene until 10:55 a.m. The Crosslake department finished the clean up from there.

“Everyone worked great together today and we [Crosslake Fire] want to thank all the departments for their help,” Lohmiller said.

The two families that were staying in the villas for the weekend were able to exit the buildings without injuries, reported Lohmiller.

The fire spread through the attic and the entire structure. The roof collapsed on 75 percent of the structure.

The Minnesota State Fire Marshal is still investigating the cause of the fire.