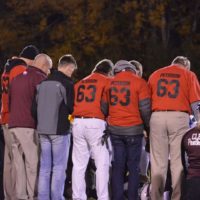 An Ada football player was remembered during an emotional game against Cass Lake-Bena last Wednesday.

Carter Peterson died in a car crash on Sunday, October 16, around 10 P-M. Peterson was driving his Dodge Avenger north on Highway 9, when a car traveling east on County Road 39 hit him at the intersection. According to a Minnesota State Patrol report, both cars flipped and Peterson’s stopped with the roof of the car on the ground when it started on fire. He was 16 years old.

The driver of the other vehicle has not been charged according to court records. Alcohol was detected in his system, according to the State Patrol report. He was taken to Essentia Health in Ada with non-life threatening injuries.

Both teams wore Peterson’s jersey number 63 on their helmets during the game, according to Cass Lake-Bena Head Coach Bryan Sathre. Carter started on both the offensive and defensive lines. His family was presented with a gift and a tribute song was dedicated to the former player.

Carter was the son of Ada volunteer firefighter Randy Peterson, according to Grand Forks Herald. He was one of the first responders to the scene.

A GoFundMe campaign has been created to assist with funeral expenses.