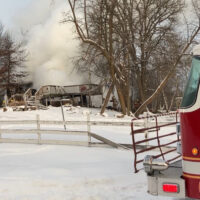 Update: The Beltrami County Sheriff’s Office reports that shortly after 1 p.m. on Thursday, December 23, two bodies were recovered after the residential fire in Liberty Township. The victims were transported to the medical examiner’s office for autopsy and identification. The cause of the fire is still under investigation.

Two children are unaccounted for after a fire at a Bemidji area home.

The fire was reported at 6:12 a.m. in the 9000 block of Pony Lake Road NW in Liberty Township about 13 miles northwest of Bemidji.

According to a press release from Beltrami County Sheriff Ernie Beitel, the second floor of the two story structure was fully engulfed when the first units arrived on the scene. Beitel says this is an active investigation and no further information will be available at this time regarding the identity of the persons involved.