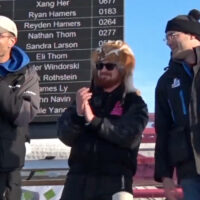 Over 13,000 of anglers gathered on Gull Lake arrived to compete for over $200,000 in prizes, and over 2,000 spectators showed up to witness the largest charitable ice fishing contest in the world.

The weather cooperated as it was one of the warmer contests in tournament history with a high of 25 degrees and wind speeds of under 10 mph. The competition started at noon and went on until 3 PM.

The top fish were all walleye of over four pounds, but 2022 Ice Fishing Extravaganza Champion Cody Sablatura won with a northern pike coming in at just over nine pounds. Between the choice of a Ford F-150 and a GMC 4×4 pickup as his grand prize, Sablatura chose the new GMC pickup.

Many different winners won tons of different prizes for different categories and raffles. All official results and scoreboards can be found on icefishing.org.