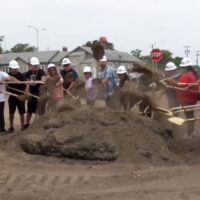 Today in Red Lake, the community gathered to witness the groundbreaking of a new radio station planned for the area.

The idea for a radio station in Red Lake began in the mid-1990s. Since then, there have been two attempts to make the station happen, and now the final pieces are coming together.

The station will be a place for entertainment but it will also be informational, with Red Lake Nation Chairman Darrell Seki, Sr. saying it will broadcast all initiatives and issues that go on in the reservation. COVID-19 in particular revealed a gap in communication for the Red Lake Nation.

“Trying to communicate our story and our information to the surround communities,” said Jerry Loud, Oshkiimaajitahdah Executive Director. “It’s one of the things that we’re going to do with this radio station is to bridge the communities.”

Another benefit of the station will be bringing new jobs to the area. Once built, it’s hoped it will be a resource for all of Red Lake, but specifically for the young people.

They hope to open the station by the end of the year. The call letters will be WRLN and the station will be on frequency 105.3 FM.

Editor’s Note: The originally broadcast version of this story listed Gerald Spears, Hereditary Chief, as one of the speakers when it was actually Eugene Standing Cloud, Oshkiimaajitahdah Assistant Executive Director, talking. This has been corrected in the video above – we regret the error.