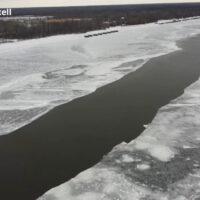 Following the rescue of over 200 anglers on Upper Red Lake on Monday, officials say they were fortunate that nobody was injured in the incident.

With the assistance from many professional and volunteer emergency personnel, tragedy was certainly averted. But officials are looking to avoid another incident in the near future.

Some anglers had to walk almost three miles to reach the ice bridge, finding roundabout ways to avoid breakaway ice. Law enforcement measured the ice to be about seven inches thick. But due to the size of Upper Red Lake, some portions could be thinner or not even frozen over, making this rescue a very dangerous one.

“We’re putting people’s lives at risk every time we do it, and again, they go out, those people wanting to go fish early on season,” said Beltrami County Sheriff Ernie Beitel. “Yes, there could be some good fishing out there, but again, those risky behaviors, you know, if we just wait, give it a little bit more time and let things freeze over solid, there’s less chance of these things happening. We’ve got to quit testing Mother Nature. She’s not going to – if we keep doing this, she’s not gonna to be so kind to us.”

With this crisis averted, the question remains, who will pay for the personnel and equipment used? The answer is through tax dollars. One reaction to the incident on social media was to fine those who were stranded, but Sheriff Beitel states this should not be the case.

“There’s nothing in place to fine these people, and I’m very much against fining these people,” said Sheriff Beitel. “And I say that just for the one reason, that if people are going to be afraid to be fined if something like this were to happen, they’re going to be more apprehensive to not come off the lake. I want them to come off the lake when these situations happen. I don’t want them out there searching for another place to get off, putting themselves at greater risk, putting our first responders at greater risk, trying to find some other place just to avoid some kind of a fine.

Officials request that people wait until there is “good” ice (which is typically clear) on Upper Red Lake before attempting to fish.