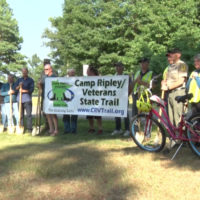 “Don’t quit. I have the Paul Bunyan Trail in my district,” State Representative Josh Heintzeman said.

The people in Little Falls haven’t quit, and an idea that started back in 1991 is finally coming to life as the groundbreaking was held today for a new trail that will connect the Paul Bunyan Trail to the Soo Line Trail.

“It will be 500 miles of continuous paved trail,” Former Little Falls Mayor Cathy Van Risseghem said. “It will create the longest paved trail in the world.”

“I’ve worked with the snowmobilers in the past, and the ATVers, and I’ve promoted their trails,” Van Risseghem said. “Biking is something that hasn’t been big in the area, but it’s growing fast – we now have a bike club.”

And Little Falls is lacking bike trails for that growing community.

“As you can see in some places, it’s only two feet wide; I mean, it’s kind of dangerous for bikers,” Frank Gosiak, Camp Ripley Veterans State Trail Chairman, said. “But they do have a trail that is designated along the Mississippi, and that’s our only trail.”

And the tourism aspect cannot be overlooked…

“You’re going to get people coming in from all over, people from out of this country who love biking look for opportunities like this,” Gosiak said.

One issue throughout the process has been getting land for the trail, but Camp Ripley stepped up, allowing the committee to bypass a tricky section of the trail.

“Trying to get land acquisition from Randall to Pillager, that leg would have been almost impossible, it would have taken 20 to 30 more years,” Gosiak said.

The celebration today was about the first section of trail from Lindbergh State Park to Mill Island Park being approved, and an almost 30-year-old idea finally getting a sign of life.

No date has been set for the completion of the trail, and the board is still in the process of acquiring all the land necessary for the construction. 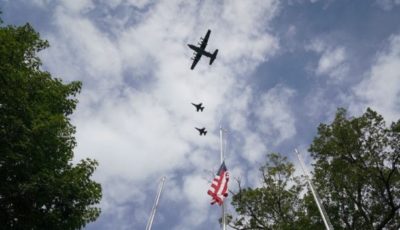