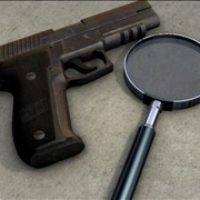 Brainerd Police agents say they are investigating “multiple leads” after an alleged armed robbery in Kiwanis Park. The incident happened around 6:30 PM on Monday near the Mississippi River bridge.

According to the Brainerd Police Department, a 20-year-old man reported that another man stole money from him. During the incident, the unnamed man brandished a handgun before fleeing the scene.

The K-9 Keno, Baxter Police Department, and Crow Wing County Sheriff’s Department searched the area but were unable to locate the suspect. Witnesses told law enforcement agents that they saw the man get into a white SUV.

The suspect is described as a white male between 20 and 30 years old, with a teardrop tattoed underneath his left eye. This can mean that the person has been incarcerated for a lengthy sentence, but it could also signify that they attempted or committed murder.

BPD says that any charges would be determined once they are able to locate the man and further investigate the incident.