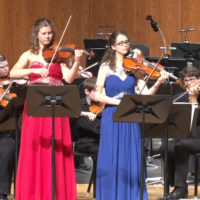 In Focus: Bemidji Symphony Orchestra Welcomes Back Past Players For “Lincoln Portrait” Concert

There have probably been around hundreds of talented musicians who have played in the company of the Bemidji Symphony Orchestra. After all, they’ve been creating the sweetest of symphonies for 80 years now. To commemorate this special season, they’ve invited back a few of their most cherished virtuosos.

“I played in it form the time I was 11 until I graduated high school, and a lot of the members are still the same so it’s fun to come back and see everyone and get to play with them,” says violist Sarah Hamrin.

“It was so much fun! I was, like, weirdly not nervous for this concert, just because, like, I know all these people and, like, they know us and it was so good to get to play for them again,” adds violinist Sadie Hamrin.

Sisters Sadie and Sarah Hamrin are Bemidji natives. Currently, Sadie is a junior and Sarah is a freshman at Baylor University.

“We would be honored to work with them as artists no matter where they came form, even if we had never known them until this week, but then when you add that special elements of those friendships and those connections, it just has made it this little bit of heaven on Earth this week,” says Dr. Beverly Everett, the BSO music director.

For the concert, the orchestra performed 4 pieces, including Mozart’s Sinfonia Concertante, the theme from “Schindler’s List,” and, of course, Aaron Copland’s Lincoln Portrait. The Sinfonia Concertante was performed by Sarah and Sadie eight years prior. Naturally, they got a standing ovation for their repeat performance.

When asked about her favorite part, Sadie says, “I think just being able to perform, both as a soloist and going back and playing with the section for the Copland – they were both awesome and also working with Bev.”

The BSO isn’t done with their high profile collaborations. They will be joined by the Park Rapids Chorale, the Bemidji Chorale, and Bemidji State University Choirs to perform their 80th season finale.

Everett says, “We’re premiering a piece by Lucas Richman called “Symphony: This Will Be Our Reply.” We’re also performing Leonard Bernstein ‘Chichester Psalms’ So that will be a big day. You don’t want to miss that premier. It’s really special when we get to do that. Bemidji is one of three orchestras in the country playing that piece, so it’s a very wonderful opportunity for us as well.”

BSO’s 80th season finale “Symphony: This Will Be Our Reply” will be performed on April 28th.