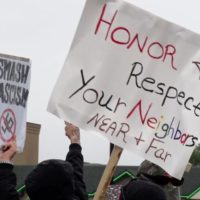 Hundreds marched through the streets of Bemidji to show unity after the deadly protests in Charlottesville, Virginia.

The crowd quickly grew near the Green Mill restuarant as more and more gathered for a peaceful march to the Paul and Babe statues.

On Saturday, one woman was killed and many were injured when white supremacists violently clashed with counter protestors over the removal of a Confederate statue. Paul Kivi, a Bemidji area resident, disagreed with President Trump’s remarks following the violence.

When Aleicia Lussier and her friend Brock Althiser heard about the march in light of the events, they jumped into action. Lussier says her grandfather fought against the Nazis and she couldn’t believe she had to do the same in 2017.

Kay Jackson wanted to participate in the march because she has been repeatedly subjected to racist remarks. A member of the Leech Lake Band of the Ojibwe, she says that a little boy called her “darkie” at the Beltrami County Fair over the weekend.

Even though Jackson says she felt it wasn’t the place to confront the issue, other allies are getting ready to step up to the plate – something Monica Hansmeyer says is critical to do when witnessing such behavior.

The Brainerd Lakes Area will also have its own “Stand Against Hate” rally on Friday. An optional sign making event will be held at First Congregational UCC (415 Juniper Street) at 5:00 PM. The march will start at 6 PM at the Gregory Park Bandshell before heading to the Historic Brainerd Water Tower and back again to the park.