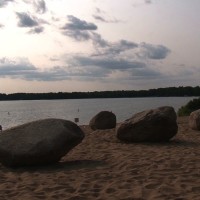 Dining, silent auction and a speaker. Things most people wouldn’t associate with a lake, but not Monday night. Nearly 400 Gull Lakes lovers came to the 3rd annual Gull Chain of Lakes Association (GCOLA) gala Monday to support preserving the lakes for future generations.
Marv Meyers GCOLA chair says, “It’s just an on going effort we have as a lake association. And whatever we can do to help maintain the quality of the waters is what we’re here for, is to maintain the quality of the waters that we’re so blessed to have.”
The Gull Chain of Lakes consist of eight lakes with over 2,500 homes spanning more than 13,000 acres before feeding into the Mississippi River. GCOLA’s gala emphasized the need to preserve the natural beauty of the lakes.
University of Minnesota professor and gala speaker, Peter Sorensen, says, “I think you got something very special here. I’ve seen many places in the world that don’t have such lakes in such great condition. And I know exactly what can happen.”
Gull Lakes’ residents say it’s important to preserve their lakes, so future generations can enjoy similar memories on the lakes.
Roger Renyolds, Rainbow Bay Resort owner, says, “I have guests who come who are in their age 30s. Kids who I taught how to swim when they were six and seven years old, and they’re bringing their families back now, second and third generation are coming to my resort all the time and it’s just beautiful. ”
Gull Lake is currently invested with aquatic invasive species like zebra mussels. And GCOLA says it’s important to raise money and awareness so they can prevent future contaminants from spreading into the lakes. They also use funds raised to pay for buoys and sheriffs for the lake.