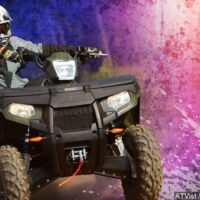 On May 28th at 10:09 A.M., the sheriff’s office received a call about an ATV crash in Rogers Township. Deputies and responders arrived on the scene to find a 15-year old boy from Little Canada with serious injuries. He was driving a 2000 Honda TRX ATV at the time of his crash which lost control and hit trees.

Medical care was provided on scene. The victim was transported via ambulance to a medical helicopter to the Twin Cities. Cass County Sheriff Tom Burch states the patient was wearing a helmet at the time of the crash. Speed does appear to be a factor in the crash.

Two other crashes occurred on May 29th.

The first was at 6:05 P.M. in Hackensack. An adult female, 42, from Shakopee was riding with a 3-year old male passenger on a 2005 Bombardier ATV. The report says the operator accelerated, struck a tree, and bounced off multiple other trees. The driver and passenger were thrown from the vehicle. Both patients were treated on the scene. They were subsequently transported via helicopters to the Twin Cities for serious injuries.

The second crash occurred at 6:11 P.M. in Backus. An adult male, 56, of Sleepy Eye lost control of a 2011 Polaris ATV. He left the roadway and rolled into a ditch. He was treated on the scene and then brought to Fargo, ND via helicopter with serious injuries.

Throughout Memorial Day, weekend deputies worked with the Minnesota DNR to conduct high visibility, intensive patrols in recreational ATV areas. These areas include Ansel, Bull Moose, Bungo, Poplar, Moose Lake, Byron, and Meadowbrook Townships. Most violations along Recreational Area ATV/OHV and Foothills ATV/OHV Trail Systems were registration issues, Safety Certificate requirements and under 18 helmet requirements. However, no crashes were reported in this area for the first time in years.