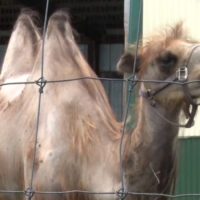 A camel attacked and bit two employees on their heads at a zoo in Freeport, MN yesterday.

A press release from the Stearns County Sheriff’s Office says 32-year-old Roger Blenker was escorting the camel through an alley at the Hemker Park & Zoo when the camel placed Blenker’s head into its mouth, biting down on his head. The camel then dragged Blenker by the head approximately 15 feet.

A second employee, 32-year-old Seth Wickson, put a plastic board into the camel’s mouth to force it to release its bite from Blenker’s head. The camel then charged at Wickson and bit his head, but the man was able to get away.

Wickson refused any medical treatment, but Blenker was airlifted to a St. Cloud hospital. His condition is not known.