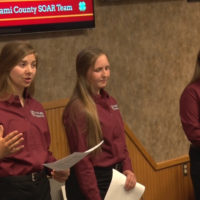 A group of Bemidji teens are heading down to the Cities next month to compete in the state Science of Agriculture Response Competition. Last year, they won first place, and this year they’re hoping to defend that title with their project on gene editing.

Team Future Generation has been working on its project since December. The team has traveled to classrooms all over our viewing area to talk about gene editing and how it can help boost production in agriculture. So far, the team has presented to more than 800 students. Gene editing is where a scientist learns how to read and modify DNA.

Haley Mouser, a member of Team Future Generation, says, “Gene editing is a great tool that scientists can use to help solve problems in agriculture. There’s a really deadly disease called African swine fever that’s very prominent in other countries and it’s devastating the pork industry, and we can gene edit pigs to be resistant to that. We can make dairy cows produce lactose-free milk so that people who are lactose intolerant can still drink milk.”

The team chose the topic of gene editing because they felt the curriculum was lacking in schools. Team members also say they wanted to break the stigma around the process.

Theresa Gustafson, member of Team Future Generation, says, “We have kind of chosen the topic of that we do because of all the fear marketing that’s out there, and we just want to help try to get the real facts out there and try to give people the correct information so they’re not afraid anymore.”

Lily Krona, a member of team Future Generation, adds, “Our curriculum is made for 3rd through 5th grade students, and we can help bring agriculture into the schools. I wish our classroom had agriculture classes because that’s my favorite thing is agriculture. So I wish we would’ve been taught this when we were young.”

The competition will be held on June 10th and 11th. If the team wins, each member will get a $1,000 scholarship. You can keep up with team Future Generation on their Facebook page here.