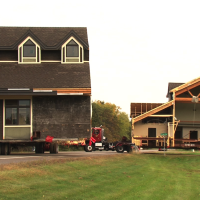 Bank on the Move

A bank caused traffic delays and numerous other challenges as it literally moved from Jenkins to Baxter Tuesday and Wednesday.
The former First National Bank relocated 31 miles in 14 hours of travel to Clearwater Road and Highway 371 to become the Lakes State Bank.
The crews move about 100 power lines for the bank to pass underneath.
The two halves of the building measuring 40 feet wide, 60 feet long and 33 feet tall traverse Crow Wing County Highways 16, 112, 11, 4, 3, and 49 and Minnesota Highway 371.
The move seems like a major hassle, but bank representatives say it makes sense, or rather dollars and cents to them.
Representatives report 25-50% savings over constructing a new building.
The building was originally erected in Jenkins in 2005 as the Woodland Bank.
In 2012, it became a First National Bank, which shares ownership with the Lakes State Bank in Pequot Lakes, only 3 miles south.
Instead of competing, the bank owners decided to move one of the banks.
Workers will place the building on its new foundation in about four weeks.