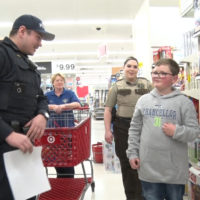 Santa got a little help once again this year thanks to the Bemidji Police Department’s 3rd annual “Heroes and Helpers” event.

“I had so much fun because I got stuff for my brother,” says seven year-old Khloe.

Her mom, Natasha Hedlund, asks, “And yourself?”

Khloe quickly adds, “And myself.”

This year, 26 kids got to spend $100 on Christmas gifts from Target. A group of 30 first responders plus 30 volunteers from the Bemidji Lions Club and the Bemidji Eagles Club acted as the kid’s personal team of elves by keeping track of the overall total and providing gift advice.

“It is essentially ‘Shop with a Cop’ but modified because we have more than cops just here to be our heroes. We have fire department personnel, state patrol, ambulance service, police officers, deputies,” says Officer Tabitha Carrigan, who has organized the event for the past 3 years.

During the shopping spree, the kids are given the opportunity to bond with their heroes and their helpers. Over the years, the event has become a favorite amongst the community and the police department.

Carrigan says, “To see the smiles on those kids faces when you tell them they get $100 to spend is pretty cool. Often times, they spend the money on themselves or their family. We don’t dictate who they spend their money on.”

After the shopping spree, the presents were wrapped by extra volunteers and the kids get their picture taken with Santa and Mrs. Claus. They leave with a giant red bag and a new friend.

“It was a good experience. She was looking forward to doing this. She’s been telling everybody that she’s going shopping with one of the heroes here in Bemidji,” says Hedlund.