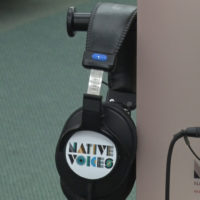 The history of wellness, illness and the cultural life of Native Americans is being told by the people who know it the most, and everyone is welcome to listen. “Native Voices: Native Peoples’ Concepts of Health and Illness” was produced by the National Library of Medicine and is on display at BSU for a limited time only.

“It’s a national exhibit, so it’s pretty unique in that way, and it’s made stops in several different states and we’re a part of the tour here, and it’s great way to talk about an important topic in the region,” says Patrick Leeport, research and instruction service librarian.

The exhibit is comprised of hours of short interviews and content. It’s made to work like a self-guided tour.

“What I really appreciate is that it’s Native people talking about their experience rather than interpretations of what they say. It’s directly from tribal and Native people,” says Leeport.

BSU plans to get the most use of the exhibit while it’s in town. That’s why they’ve scheduled a few events that center around the display.

“We have two programs coming up. The 26th of January we’ll have Devery Fairbanks who is a Native story teller, and that’s at 2:00 in the afternoon here in the library, and on February 7th which is a Thursday at 4:00, we have a Native health panel discussion,” says DeeDee Narum, a cataloguing and electronic resources librarian.

The exhibit will be at the library until February 14th. It’s open to everyone and accessible anytime the library is open. Our local librarians say they hope many of public will stop by and listen.

“There’s so much depth to the knowledge and the wisdom and just the history and the information that is being shared, and so it’s been just hugely educational and eye-opening,” says Narum.