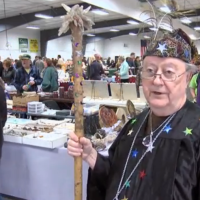 Take a guided tour of The 2014 Cuyuna Gem, Rock and Mineral show in Brainerd MN with the ROCK WIZARD; he introduces us to the culture of ROCK HOUNDS!

On this episode glimpse part of the Rock Hound culture as they buy, sell and trade rocks of all kinds from around the world. See multiple examples of semi-precious gems, rare rocks & minerals as well as fossils of ancient life millions of years old, at the 2014 Cuyuna Gem, Rock and Mineral show.
Correction: The Minnesota State Gemstone is Lake Superior Agate, not Thompsonite as stated within. Opinions and materials expressed are those of our participants and not of Lakeland PBS.