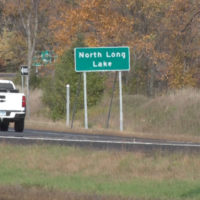 Four duck hunters and a dog were rescued from a Brainerd area lake on Saturday after the boat they were in capsized due to high winds.

According to the Crow Wing County Sheriff’s Office, at around 10:00 a.m. Saturday, their office received a call from one of the hunters reporting that the boat they were in had capsized on North Long Lake. The sheriff’s office was able to locate the four hunters and their dog using GPS from the caller’s cellphone. The four individuals were located and all exhibited signs of hypothermia and were taken to the hospital.

“All the occupants and the dog were able to make it to shore. The water temperatures this time of year are starting to get cold and they were all wearing life jackets so we give a very big credit to the life jackets in aiding them to be able to get to shore and they were treated. They were starting to show the signs of hypothermia,” said Crow Wing County Sheriff Scott Goddard.

The Crow Wing County Sheriff’s Office was assisted at the scene by North Memorial Ambulance and the Minnesota Department of Natural Resources.