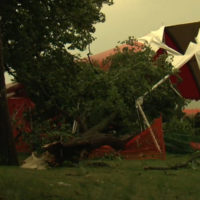 To celebrate our 20th anniversary of Lakeland News, we’re taking a look back at some of the memorable local stories we’ve covered over the years. We’re calling it 20 For 20 – twenty stories in all, one for each of the twenty years we have been on the air with Lakeland News.

The 4th of July is a big time for outdoor events in many communities in our viewing area. In Bemidji, the Jaycees Water Carnival is a 4th of July tradition, but things turned frightening on July 2nd of 2012 when a fast-moving storm system moved through the area and heavily damaged areas from Bemidji all the way to Grand Rapids. Reporter Jamil Donith had the report for us the night of the storm.

The National Weather Service reported that the storm produced straight-line winds of 70 to 80 miles per hour. Many residents were without power for at least a day, but no one was killed in the storm. Reporter Jamil Donith is now a multimedia journalist in West Palm Beach, Florida.