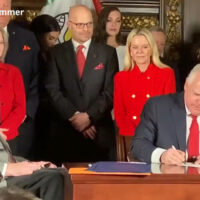 Walz Signs ALS Bill by State Senator with the Disease

ST. PAUL, Minn. (AP) — Gov. Tim Walz signed a $25 million bill to fund research into ALS that was authored by a veteran state senator from the Iron Range who has the neurological disease.

Sen. David Tomassoni, 69, of Chisholm, took up the cause after disclosing last year that he had ALS, also known as Lou Gehrig’s disease. His case has progressed rapidly, forcing him to participate in most Senate business remotely this session.

Tomassoni said through a computerized speech synthesizer that the Democratic governor and legislative leaders from both parties told him after his diagnosis that they would support whatever he wanted for funding.

“Maybe I should have asked for more,” Tomassoni quipped at an emotional signing ceremony. He later added, “This bill means hope.”

Here’s a look at the bill, the disease and Tomassoni’s case.

ALS stands for amyotrophic lateral sclerosis, though it’s better known as Lou Gehrig’s disease, after the New York Yankees baseball player who died of it in 1941. It’s a progressive disease that affects nerve cells in the brain and spinal cord.

There is no cure, there are few treatment options, and most patients die within three to five years of being diagnosed. It ultimately robs people of their ability to walk, talk, and eventually breathe. At any given time, roughly 450 Minnesotans are living with the disease.

Another prominent victim was celebrated British physicist Stephen Hawking, who died in 2018 after living with ALS for a highly unusual 55 years.

Tomassoni was a Democrat for most of his political career. He was elected to the House in 1992 and the Senate in 2000. The Chisholm native also spent 16 years playing professional hockey in Italy and was on Italy’s national team for the 1984 Sarajevo Olympics.

But he became an independent along with fellow Iron Range Sen. Tom Bakk, of Cook, in 2020, splitting with the liberal Democratic caucus to focus on the economic interests of northern Minnesota, where voters have been drifting away from the Democratic Party. The Senate GOP majority temporarily made him Senate president in 2020, then president pro tempore for 2021.

Tomassoni was diagnosed last June and went public last July, saying he had felt the early effects of ALS through the 2021 legislative session. He could still drive, dress and feed himself as recently as September. But he now has little movement and uses a wheelchair to get around and an optically driven voice synthesizer to speak. He’s not running for reelection.

In a particularly poignant moment at the ceremony, his sons had to wipe the tears from his eyes as tributes flowed from other lawmakers.

The legislation gives $20 million to the Office of Higher Education to award competitive grants for research into the disease’s prevention, treatment, causes and cure. Eligible applicants are research facilities, universities and health systems located in Minnesota. Likely recipients include researchers at the University of Minnesota and the Mayo Clinic.

It also includes $5 million to help families care for ALS patients, including respite help for caregivers. The money will be available through June 30, 2026.

The Senate passed the bill unanimously and it passed by a vote of 121-9 in the House, where its backers included GOP Deputy Minority Leader Anne Neu Brindley, of North Branch, who lost her husband, Jon, to ALS in 2016. Like several lawmakers at the ceremony, she wore red, a color that signifies ALS awareness.

The $25 million isn’t a lot compared with the state’s $9.25 billion budget surplus. But the bill stands out as one of the early bipartisan successes of the 2022 session, in which the Democratic-controlled House and GOP-led Senate have found little common ground on what to do with the surplus. Walz is expected to soon sign the other major bipartisan success, divesting state government from its investments in Russia to protest its war in Ukraine.