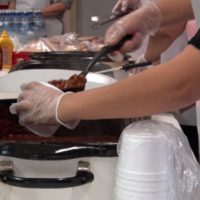 Through a volunteer effort, people needing a warm meal can get one for free at the Red Lake soup line. The free weekly service started at the beginning of the year and has served thousands since.

Darilyn Perkins saw how many of her daughter’s friends were looking for a good meal and thought others in the community might be as well.

“Every day they would come over and I’d tell them what I was cooking and they’d be all excited,” Perkins said.

Her mother, Cheryl Bowstring, had been thinking about putting a soup line together for years, and this gave her the push for them to create one.

“I’ve seen them, but I’ve never done anything like this,” Bowstring said.

They met with Mary Omen to bring the idea to the community center. After receiving donations from grocery stores, community members, the tribal council and other reservation groups, they were ready to hold their first soup line of about 50 people.

She helps promote the event each week through Facebook.

“But once the word gets out, they’re here every Monday,” she added.

Helen Andersen said she has been experiencing homelessness and was thankful for the meal.

“[It’s] nice- good to gather around here and glad to see everybody,” Andersen said.

Rhonda May was happy to see them serve different areas of the reservation, as the soup kitchen has been in Ponemah, Redby and Little Rock . She says it’s her family’s weekly night out.

“The little one always goes over [to the cooks] and says ‘good, it was good,”’ May said of her grandchild.

For Cheryl Bowstring, she says there are other projects she’d like to put in motion to further the community.

“Maybe open a drop-in center or something where people can just hang out, visit or just stay warm,” Bowstring said.

The soup line will hold a celebratory year anniversary meal on January 2nd.

Anyone looking to make a tax deductible donation can do so by calling Mary Omen at the Red Lake Community Center at (218) 679-3221.