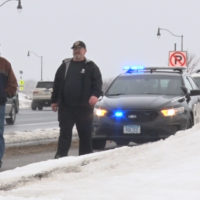 “This will be my legacy. I just can’t see me doing this again at my age because it is really brutal out,” says Jerry Meadows.

60-year-old U.S Air Force veteran Jerry Meadows has been planning his 215-mile walk from Bemidji to St. Cloud for months. It won’t be easy for him – he uses an oxygen tank and he’s had 10 cardiac stints, but he says it’s all worth it to raise money for the Wounded Warrior Project.

“I don’t feel like they’ve gotten the credit that they’ve needed, unlike the V.A. and I’m not knocking them, but the Wounded Warriors Project also facilitate programs for family members, which the V.A. rarely does,” says Meadows.

Meadows’ friend Ricky Wietzema volunteered to walk beside him, while Meadows’ wife Virginia Miller follows behind in a truck marked with lights and an American flag. The group left Bemidji this morning at 9 a.m with a few police escorts for safety. A few fellow veterans also showed up to send them off.

“I worry about his heart and the weather, and I’ll so glad when he comes to the end of the line and gets it finished so we can get home and get him rested back up to where he can drive me crazy again,” says Miller with a laugh.

They estimate the walk will take around 30 days and plan to sleep in the truck when they get tired. When they left this morning, they had $15 raised. Meadows says even if they only raise one dollar, the journey will be worth it.

On what he’s looking forward to from the mission, Wietzema says, “that great feeling of achieving this goal that we’ve set.”

Meadows adds, “Even if you can’t afford a dollar, just honk. You would not believe the motivation that that gives people who are out there.”

The group says their goal is to raise $10,000. To make a donation to the fundraiser, head to https://fundraise.woundedwarriorproject.org/RTT/Fundraising/individual/ROAD-WALKERS1 or call Meadows at (701) 403-4993.