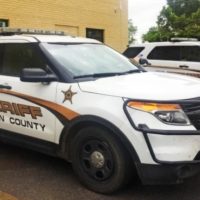 The Morrison County Sheriff’s Office confirms the getaway vehicle involved in a robbery last weekend at Tiny’s Tavern has been found.

According to a report from the sheriff’s office, two male suspects entered Tiny’s Tavern in Lastrup on March 8th at approximately 11:26 p.m. wearing dark colored bandanas over their faces. The suspects went behind the bar and took a bag containing an undisclosed amount of cash.

The two suspects were described as young males, approximately 5’4” to 5’7” tall, thin build and were wearing dark clothing. The suspects fled the bar and were picked up by a third suspect who was driving a small dark colored SUV. The vehicle’s make and model hasn’t been disclosed, but the SUV has a luggage rack on top and damage to the windshield.

Man Found Dead Under a Vehicle in Morrison County