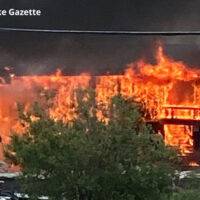 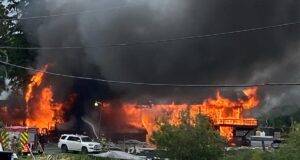 Update: The Northernaire Houseboat structure fire has claimed the life of one person after further investigation.

The Koochiching County Sheriff’s Office announced in a press release regarding the fire that the body of an 85-year-old woman was discovered at approximately 11:20 p.m. on August 24th. The victims of the fire are related and operates the resort where it was located.

Officials report that the second victim, a 51-year-old female, attempted to reenter the structure to rescue her mother. This victim was later sent to Rainy Lake Medical Center in critical condition and later sent to a higher level trauma center via airlift. Currently, her condition is unknown. The third victim, a 12-year-old female, remains in stable condition at Rainy Lake Medical Center.

The scene of the fire was officially cleared at 3 a.m. after firefighters worked into the early morning hours extinguishing the flames.

Although the cause of the fire is still under investigation, the Koochiching County Sheriff’s Office state that it is believed to be accidental. No suspicious activity is suspected.

The body of the deceased was sent to the Midwest Medical Examiner’s Office. Next of kin have already been notified.

A structure fire on Rainy Lake sent two to the hospital yesterday evening.

According to the Koochiching County Sheriff’s Office, on Wednesday, August 24th, at approximately 5:11 p.m. deputies were alerted of a structure fire at Northernaire Houseboats on Rainy Lake. When the International Falls Volunteer Fire Department arrived on the scene, the main structure of Northernaire Houseboats’ business office/home was fully engulfed. Due a portion being an older log structure, the fire was more difficult to battle and hotter than usual. By 8:25 p.m., firefighters managed to knock down the fire and enter the mop up stage.

The sheriff’s office reports that two victims, not named in the release, sustained injuries in the fire. One with critical injuries was transported to a medical facility for a higher level of trauma care. The second victim is being treated at Rainy Lake Medical Center and is reportedly in stable condition.

The cause of the fire is currently unknown and under investigation by the Minnesota Fire Marshal’s Office. The Koochiching County Sheriff’s Office, Little Fork Volunteer Fire Department and International Falls Ambulance Service all assisted on the scene.

No further information is available at this time.