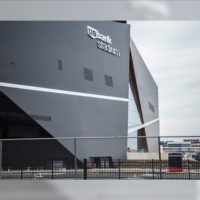 The executive director of the authority overseeing the Minnesota Vikings’ stadium has resigned, joining the chairwoman in leaving after weeks of criticism over questionable use of luxury suites by family and friends, according to the Associated Press.

Ted Mondale announced his resignation from the Minnesota Sports Facilities Authority Thursday in a statement that came hours after chairwoman Michele Kelm-Helgen resigned.

The authority was targeted by Republicans at the Minnesota Legislature for lack of judgment.

A recent legislative audit found that nearly half of the tickets for a pair of suites controlled by the stadium authority were issued to friends and family of top officials. No laws were broken but GOP lawmakers are pushing to reshape authority governance.

It leaves a leadership vacuum at the oversight board as Minnesota gears up to host the 2018 Super Bowl.