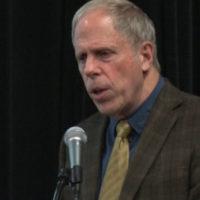 It’s almost been a year since Donald Trump was elected as the 45th President of the United States. On Monday night, the Gordon Rosenmeier Board for State and Local Government examined the foreign policy of President Trump so far with guest speaker and foreign policy expert Tom Hanson. Hanson is a former U.S. Foreign Service Officer with the State Department and said that North Korea is the number-one issue facing America from a foreign policy standpoint.

As for the greatest threat facing the United States in terms of foreign policy, it’s the growing rhetoric surrounding nuclear war.

Hanson also presented this time last year, but he has seen fundamental differences in the political landscape since then. He says that being aware of the changing political, economic, and technological landscape is what he wants the attendees to take away from the lecture.