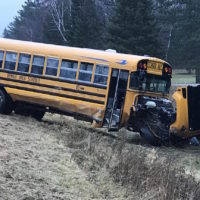 A few students suffered some bumps and bruises this morning after a Bemidji school bus crash in Hubbard County. The incident happened at exactly 7:05 in the morning at the intersection of County Road 9 and 229th Ave.

A Toyota Camry, driven by Kristine Marcene Bommersbach, 28, of Bemidji, was traveling north on 229th Ave. The Bemidji school bus was traveling on County Road 9. The Camry went through the intersection, striking the bus in the front driver’s side.

Bommersbach was taken to Sanford Hospital in Bemidji to be treated for non-life threatening injuries. The driver of the bus was identified as John Ernest Lund, 68, of Bemidji. Lund was taken to a walk-in clinic by a private party.