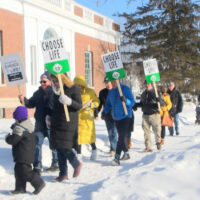 Saturday, Jan. 21 saw abortion opponents in Bemidji hold their annual March for Life event. Hosted by St. Philip’s Catholic Church and coinciding with the national event in Washington, D.C., the event saw a number of guest speakers give presentations after the march itself, including U.S. House Rep. Pete Stauber.

The event has been held nationally since the 1973 Roe v. Wade decision, where the U.S. Supreme Court ruled that there was a constitutional right to an abortion. This year marked the first time the event was held since Roe v. Wade was overturned last June.

Attendees of the march estimate over 150 people were present for the walk.

“That feels so great. We get the word out and there’s more and more people it seems like each year, who are interested and motivated,” said St. Philip’s Church St. Gianna group member Elizabeth Upgren. “We’re reaching hearts and souls and people are becoming more aware of this issue.”